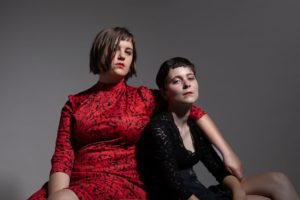 Internationally renowned Melbourne duo Oh Pep! have released their second long player I Wasn’t Only Thinking About You… into the world today. It’s an album that thoughtfully explores the melody-rich expanse between indie pop andalt-folk, while dipping into themes of growing older, and seeing the world. I Wasn’t Only Thinking About You… is more expansive in sound and vision than it’s predecessor (2016’s debut Stadium Cake) and unequivocally demonstrates the vast progression in Oh Pep!’s songwriting. Music critics around the world seem to be in agreement.

The album was preceded by the vital first single “What’s the Deal With David?” followed by the finely textured and crescendoing ‘Hurt Nobody’. The latest piece of music to be lifted from the album is ‘Your Nail And Your Hammer’. Described by Paste Magazine as “effortlessly catchy” the song chronicles a chance encounter waiting in line to receive a social security number. Olivia Hally from the band explains further..

“This was my perceived story of someone I met in line for my social security number. I am often curious about other people’s stories, about how they got to where they are right now… but this was of a fleeting encounter where my imagination flared, prompted weeks later by some song titles I had written on my wall.”

LISTEN TO YOUR NAIL AND YOUR HAMMER HERE

Oh Pep! have just wrapped up a successful run of headline shows and supports with Gregory Alan Isakov in North America and will join Middle Kids for a European tour next week. The duo will return home to Australia in December for the I Wasn’t Only Thinking About You…album tour hitting Melbourne, Brisbane, Adelaide, Fremantle, Perth and Sydney. Tickets are on sale now . The duo will also be preforming at festivals like Queenscliff, Fairgrounds and Ocean Sounds over summer.

I Wasn’t Only Thinking About You… was written and recorded across New York, Nashville, L.A and Melbourne – with the majority recorded at home in Melbourne with Australian producer and artist Joel Quartermain (Eskimo Joe). The album, mixed by Marky Wallis (Talking Heads, REM, The Go-Betweens, U2).

I Wasn’t Only Thinking About You… is out now on digital, CD and vinyl formats
Stream or download the album HERE

“Poignant indie-rock at its finest” – Mojo

“An arsenal of playful hooks that could seduce anyone.”– The Music

“I Wasn’t Only Thinking About You… not only creates a rare space for nuance, but does so with artful, dance-worthy tracks.” NPR