Quiet achiever, Spectoral has today announced his new single Movin’ On, an ominous dedication to a lovesick friend, out October 12.  Movin’ On is the very first taste of the upcoming new EP An Incorruptible Dream from Spectoral, the stage name of producer singer-songwriter Andrew Bitto.  Also dropping on October 12, An Incorruptible Dream is an understated, considered and truly unique collection of songs from the newcomer.

Movin’ On feels evocative of some big names – Flume, Peking Duck, even Kanye West’s melancholy production style comes to mind – but there is something still so one-of-a-kind about it, something so uniquely Spectoral, that makes it such a special listen.  Instrumentation features co-production fromMartiln (one half of Twofold Vision) and sees synths glide effortlessly alongside each other, ducking perfectly behind carefully placed percussion, while Spectoral’s distinctive vocal leads the way with intensely relatable lyrics.  Reflecting on the inspiration behind the track, Andrew says, “I actually wrote this one about a good friend of mine.  We’d catch up and she’d always tell me news about this guy she was in love with.  Things never really worked in her favour with him because he was already taken – it was this kinda Love Actually moment for her I guess, just in reverse.  So anyway, we’d chat about it, and she just found it so hard to give up the dream of one day him being hers.  So this song’s about that.  It’s about accepting the loss and letting it go.”

Movin’ On appropriately precedes the highly anticipated EP An Incorruptible Dream.  Working alongsideTim Watt and Tim McArtney of Hercules Studio in Sydney (Flume, Touch Sensitive, George Maple), fellow producer Alius aka Sebastian Ivanov (Blake Rose, Arizona Jones) and musician Robin Waters (Ella Hooper, The Boat People), An Incorruptible Dream fuses pop, R’n’B and electronic influences flawlessly, all amongst a sparkling bed of confessional, well-crafted lyrics.  Andrew explains the themes behind the EP, saying, “The name An Incorruptible Dream is a line from The Great Gatsby actually.  It’s this idea of always trying to reach for the unattainable, whether it’s a person, or a state of mind, or a level of perfection or success.  Unfortunately for Gatsby it blinded him and led to his downfall.  The EP explores this theme that is definitely in my life in different ways.  I  planned this EP back in January, but actually a couple of the songs here I’ve been sitting on for literally years.” 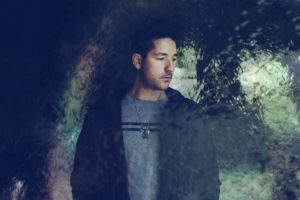 So it’s no secret that this EP has been a long time coming, especially for Spectoral’s dedicated fanbase – and Andrew is thrilled to finally be ready to unleash these never-before-heard tracks onto the world, enthusing, “I’m so pumped!  It’s like seeing a little bonsai tree that you’ve been caring for finally sprout flowers…I feel like I’ve really nestled into my sound over the past year, thanks to the experience of working with so many awesome engineers and co-producers all over this project.  It’s been the most eye-opening and fun experience.”

An Incorruptible Dream is out October 12.