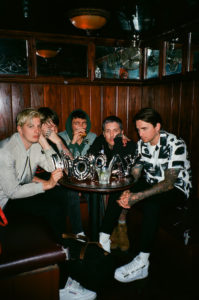 Multi-platinum selling Bring Me The Horizon are on course for world domination in 2019, with a fresh Grammy Nomination now under their belt and news of their curated headline show at All Points East festival in May announced plus a sold-out US Arena tour. A third single entitled medicine, is available now ahead of their new album amo, which is out on January 25 through RCA / Sony Music Australia.

The single was also Annie Mac’s hottest record on Radio 1.

Those who pre-order amo from JB Hi-Fi have the opportunity to win a double pass ticket to see Bring Me The Horizon live at one of their performances on their East Coast Australian tour in April 2019 + a meet and greet with Bring Me The Horizon for the winner and their guest.

Bring Me The Horizon are one of the most exciting and successful rock bands to emerge from the UK, selling over 4 Million albums globally to date, playing sell out shows in over 40 countries, including two sold out nights at London’s O2 plus wowing a traditionally non-rock crowd at Glastonbury Festival in 2016. They just completed a sold out UK tour in November and embark on a mammoth US tour next month before heading to Australia in April.

Australia is the first territory in their career to take Bring Me The Horizon to platinum sales on That’s The Spirit. They have 3 consecutive ARIA #1 album debuts in a row with ‘There Is a Hell, Believe Me, I’ve Seen It. There Is a Heaven, Let’s Keep It a Secret’, ‘Sempiternal’ and ‘That’s The Spirit’.

Poised now to release their sixth studio album, the band spent last summer writing and recording in Los Angeles, with Oli Sykes and Jordan Fish handling production. Bring Me The Horizon continue to push the envelope in terms of sound and blur the lines of traditional rock, well and truly taking it to the next level! 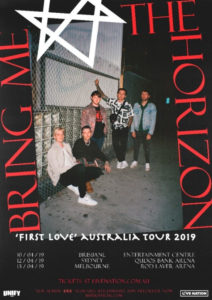