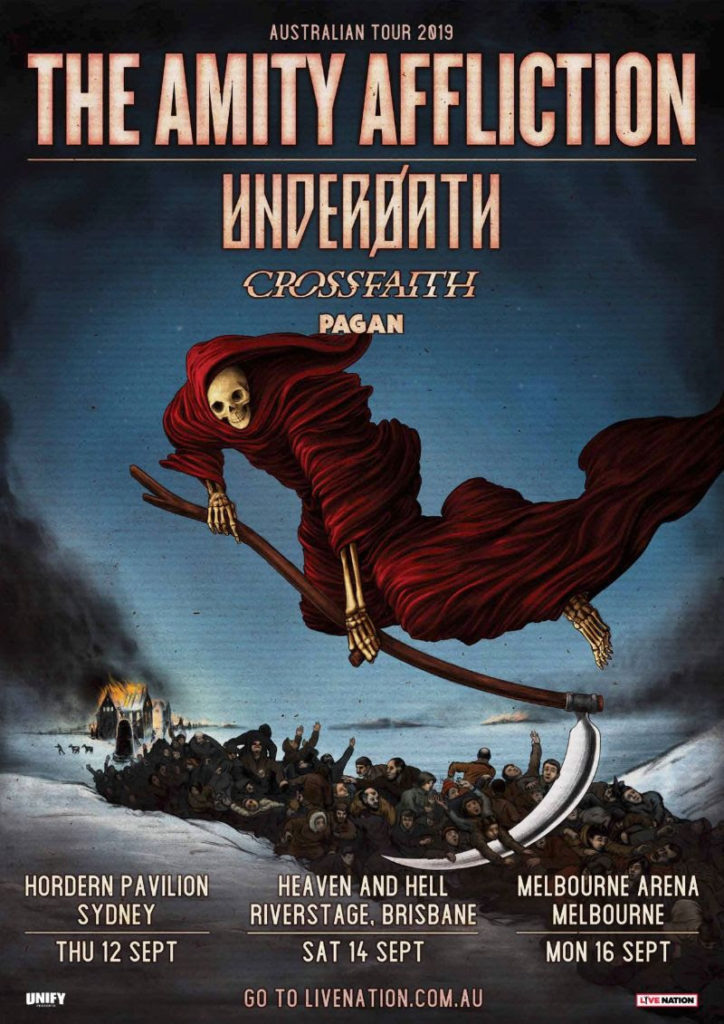 THE AMITY AFFLICTION, arguably Australia’s most successful heavy music exports have announced their huge Australian Tour in September with the support of UNDERØATH, CROSSFAITH and PAGAN.

For all the Brisbane fans, you’ll be treated with the “Heaven And Hell” as part of Brisbane Festival’s 30th anniversary of Riverstage celebration on Saturday 14 September. This show includes additional performances by SOUTHEAST DESERT METAL, VOID OF VISION, ENDLESS HEIGHTS, THORNHILL and more to be announced at a later date.

Tickets for all shows go on sale at 12pm Friday, March 29.

My Live Nation members can secure tickets first during the exclusive pre-sale beginning 12pm Wednesday, March 27 until 10am Friday, March 29.

THE AMITY AFFLICTION claimed their fourth consecutive #1 ARIA chart debut with their sixth studio album, “Misery”, (on Roadrunner Records). The album also remained at #1 on iTunes album chart for the entire first week of release. They join a handful of Australian artists to accomplish four consecutive #1 ARIA album debuts along with Silverchair and Powderfinger. Previous #1 albums for The Amity Affliction are “Chasing Ghosts” (2012), “Let The Ocean Take Me” (2014) and “This Could Be Heartbreak” (2016).

“Misery” was supported with the release of cinematic videos for ‘Ivy’ (Doomsday), ‘Feels Like I’m Dying’ and ‘D.I.E’ together formed a short film written and co-directed by frontman, Joel Birch. The videos have a combined total view of over 2.2 million on YouTube alone.

Fresh off two performances at Download Australia, sold-out crowds around the globe, there is no room for slowing down and these shows will be the biggest yet.

In 2018, UNDERØATH released their first album in eight years, Erase Me, on their Fearless Records debut and added another crucial chapter to their formidable legacy. These melodic power merchants have gold certified records under their belts with They’re Only Chasing Safety (2004) and Define The Great Line (2006). Even with a comeback title seemingly marinating in self-fulfilling prophecy, nobody in their right mind would dare delete UNDERØATH’S measurable contribution to the advancement of post-hardcore and heavy rock. The only thing you need to erase is your patience with their pretenders. It’s great to have UNDERØATH back.

Having long been considered one of the most impressive bands in the world, CROSSFAITH continue to evolve and excite. Their latest release, EX_MACHINA is set in an alternative near future in which the ruling class, known as Angels, maintain their world through artificial intelligence and other technology, which dehumanises people and effectively turns them into drones. Since their inception, CROSSFAITH have been on the edge of a fusion of rock, metal, electronica and big ideas on their albums; and the edge of euphoria with their live shows. The band recently moved up to arena level at home in their native Japan and continue to tour regularly throughout the UK & Europe.

Dwelling in the shadows of Melbourne, PAGAN have spent their young but exuberant existence building a cult attraction to their wild, ritualistic performances and bittersweet death rock and roll. Whether a slot on renowned festivals like UNIFY, Yours & Owls or BIGSOUND, or national tours playing stadiums with Rise Against, or sweaty club shows with King Parrot and Clowns, Pagan have made a name for themselves with their blistering live show, making an impact on each stage they play.

The Amity Affliction’s Brisbane performance is presented with Brisbane Festival